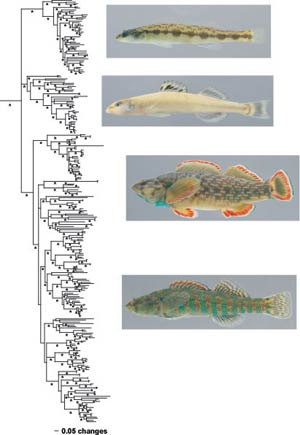 Darters are a clade of approximately 225 teleost fish species endemic to freshwater habitats in eastern North America.  We are using a near-complete sampled phylogeny of the entire clade to investigate patterns of diversification.

Through the course of constructing a complete species sampled darter phylogeny, or the “big darter” tree, we have been investigating strategies of data sampling.  Questions include determining the number of base pairs sampled from the mtDNA genome to provide maximal phylogenetic resolution, and the effect of including DNA sequence data from ten nuclear genes.  Obvious directions for this aspect of my research program include identifying incongruent phylogenetic patterns from different genes, and genomes, and developing biological hypotheses (introgression, ancestral polymorphism) to explain such incongruence.

Yale E&EB graduate student Richard Harrington is investigating the utility of data on morphometric variation and phylogenies using molecular data to investigate cryptic species diversity in darters.  He is also interested in the comparative biogeography of the Cumberland, Duck, and Tennessee River systems.

Another equally important contribution of the “big darter” tree is the discovery that much of the diversification of darters has occurred within, as opposed to between, disjunct areas of the Central Highlands in eastern North America.